MKA was invited to attend a conference on 'Roots of Violent Radicalisation' hosted at DMU where Reverend Jesse Jackson recieved an honorary degree from DMU. One of the world’s most famous civil rights campaigners, Reverend Jackson, who twice ran for president in America in the 1980s, was a keynote speaker at this event.

Reverend Jackson’s keynote speech looked into the lessons learnt from the US experience of tackling radicalisation.

Keith Vaz MP, who is chairman of the Home Affairs Committee, said: “The roots of violent radicalisation remains a subject of great national interest".

Other speakers addressed topics such as how the experiences of Northern Ireland informed the Government’s Prevent strategy, a closer look at how big a threat there is from the far right, including challenges facing police today and how to counter radicalisation in prisons. 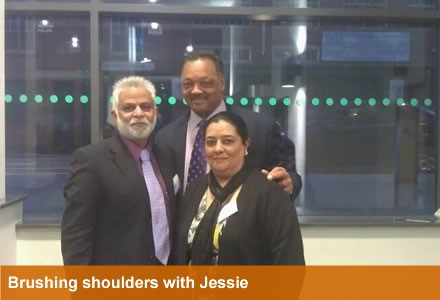 This site uses cookies and other tracking technologies to assist with navigation and your ability to provide feedback. We use this information to make our site better and to understand how our site is used. By continuing to use our site, we’ll assume you’re okay with this. Read more about the cookies used on our site, what we do with information we collect and opting out of our services.